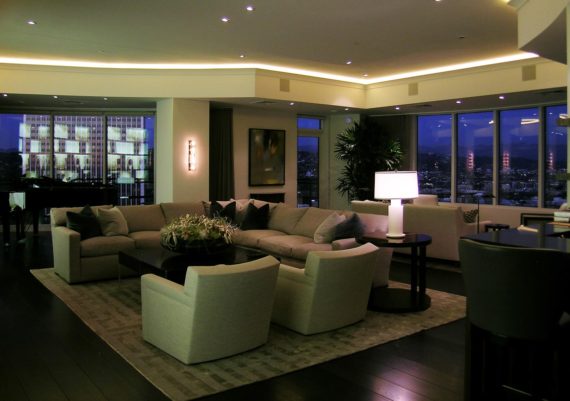 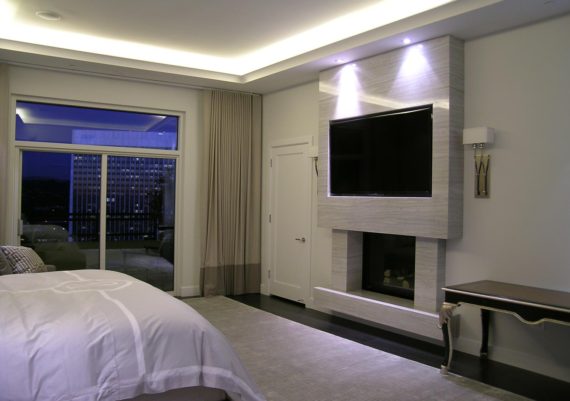 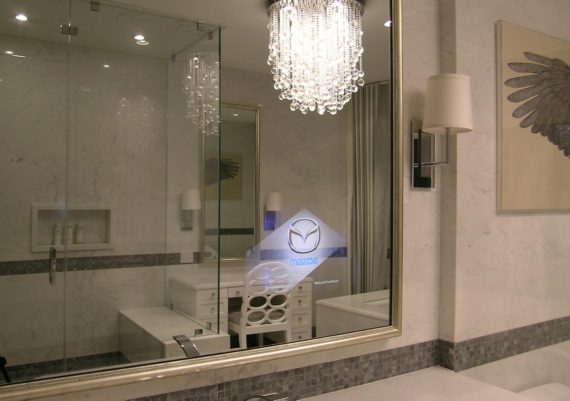 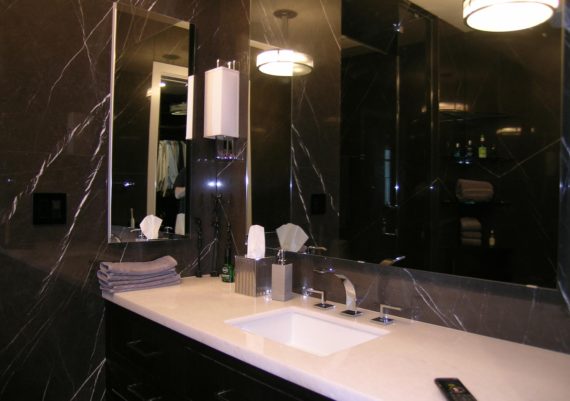 This Century City Penthouse integrates automated lighting systems, audio, home theater, video system, networking and cameras. Throughout the home, a Control 4 system provides control and ease of use. A centralized rack houses every music and video sources , eliminating box clutter in various rooms. From mirror tvs in the bathrooms, to LEDs house wide, the system has been stripped down to feeding only three Satellite receivers ( His , Hers, and Guest ) , one Apple TV and one Blu-Ray to any one of six locations including speakers and surround. The client can pull up pictures on an Apple TV, and instantly send them to any display . At the touch of a button by a keypad by the door, every display and music feed turns off.

The Lutron shades or Lighting interface with Control 4 . From any Control 4 touch screen throughout the home, the client can intercom hands free , control music, view security camera, control all climate zones and more.

If a Guest comes to the Penthouse, when a simple doorbell is pressed, it plays a WAV file of a doorbell over various speakers. If music is playing, the music pauses, the doorbell chimes, then music returns.

Suera mirror displays reside in two bathrooms , His and Hers. Consistent with the rest of the home, video feeds such as DirecTV or Apple TV.

Audio from any video or music source can play in any room in any combination. A Control 4 bridge allows music to stream from a wireless mobile device, and a Autonomics MMS2 can play Pandora, Rhapsody, or Itunes throughout the Penthouse.

Control4 sells hundreds of products to automate homes and businesses. A Control4-certified dealer will work with you to determine which products are required to deliver a personalized experience that will delight and amaze your family, guests, or for business owners, your partners and customers.

Zektor is proud to design, manufacture and support our products here in the USA. We believe that you can still offer a premium quality product at a competitive price without having to go China.

Here's another rare idea; listen to your customers and give them what they want. That's what we have done beginning with the release of our professional Clarity series.

This enduring relationship between Integra and THX guarantees even greater reliability and quality from certified A/V products.

If you’re tired of rolling a truck every time you need to reset a cable box, modem, router or other network device, the WattBox™ IP+ Controllable 12 Outlet Power Conditioner with Auto Reboot is the solution. It provides premium surge protection and noise filtration in a versatile rack-mount design, offers eight controllable outlets, and is smart enough to automatically reboot the device when network connectivity is lost. Add remote access, scheduling and email – and you can say goodbye to unnecessary service calls.

What People are Saying

Get a Free Consultation